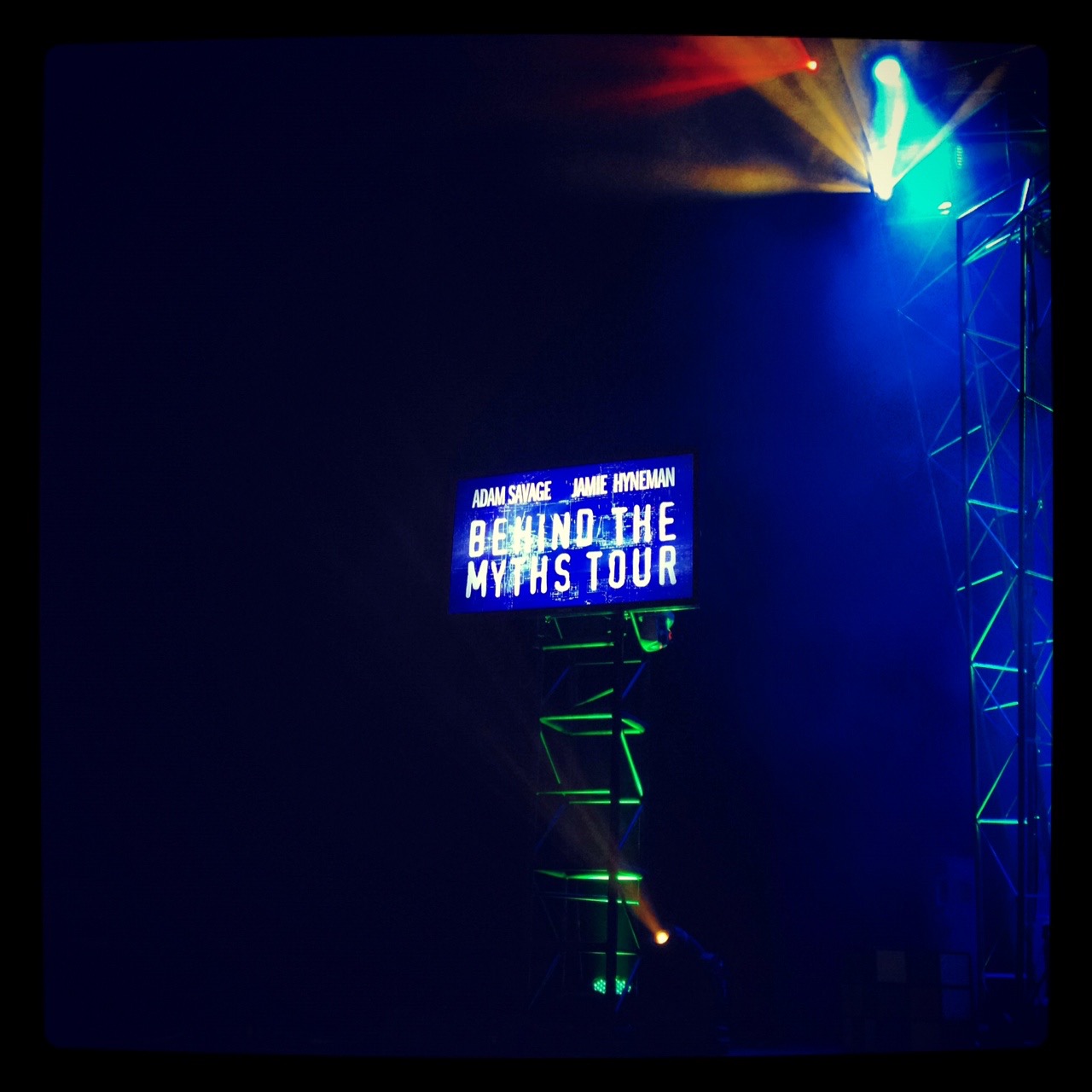 When I was a young girl living in New Jersey, my Mother would often take my sister and I over the George Washington Bridge to New York City. We would go to Lincoln Center to see performances like the Nutcracker. I recently had the pleasure of taking my children over the boarder to Montreal to the Place des Arts to see the Mythbusters Behind the Myths Tour. I am not sure that Jamie and Adam are planning a stop at Lincoln center on this tour, however, I couldn’t help but be reminded of my childhood while sitting in the Place des Arts.

Living in Burlington, we go to Montreal a few times a year.  We like to stay in Old Town at the Hotel Nelligan, but this time we choose her sister hotel, Le Place D’Armes. Using Tablet, I booked a Jr. Suite for just $240/night. When we checked in, they had upgraded us to a penthouse suite on the seventh floor. We were more than impressed!  This suite had plenty of room for our family of four. The separate king sized bedroom had a master bathroom that scored huge points with all of us, but especially our kids, as it had a gigantic soaker tub with a TV, plus a walk-in rain shower.

Although the hotel is in an old, historic building, we loved the urban, upscale style of the large living room with exposed brick, electric fireplace, and modern furnishings. There was a small 4-person table, a large desk and a pullout sofa bed that was perfect for the kids. They even had their own half-bath. As always, I appreciated the complimentary Wi-Fi. If you are new to Old Town check out their mConcierge App that is helpful for guiding you to great local shops, attractions and restaurants. The Mythbusters Behind the Myths Tour has been on my 13 year old son’s radar for months.  He diligently watches every show  at  least 6-8 times.  Something I am okay with as I think the show fosters an interest in math, science, creativity and a penchant for blowing things up.  Well, I am not so okay with that last part, but I suppose boys will be boys. When we saw that they were coming to Montreal naturally I knew were going. We made sure to get seats in the first 3 rows, as audience participation is a key component of the show and I was pretty sure he was going to find his way on stage to take part in an experiment.  Sure enough, he did.  As if that weren’t enough, both Jamie and Adam took questions from the audience and he had the opportunity to them about Jamie’s “walrus like mustache”.  Not exactly the scientific question I was hoping he had in mind when he raised his hand, however it garnered lots of laughter from the audience.

After the show was over we walked back to old town to have dinner at Gibby’s. This two hundred year old restaurant used to be a stable. Now patrons can enjoy the beautiful stone interior of this historic building as a steakhouse. It was packed and I was glad we had made a reservation.  When you first sit down, you are served a bowl of sour pickles, a warm loaf of bread and a bowl of bacon bits.  My kids thought this was outstanding. They weren’t nuts about the rest the menu but made pickle and bacon sandwiches right away. My husband and I thoroughly enjoyed our Chicken Kiev and Filet Mignon and the kids changed their tune when it was time for dessert. Nothing like crème brule or blueberry cheesecake to make a meal. The next morning we took a tour of Notre Dame Basilica. No relation to the one in Paris (myth busted!), it simply means “our lady”.  This church is as stunning inside as it is out. It certainly is magical. My son commented upon entering “Whoa, Mom, doesn’t it remind you of the Magic Kingdom?” I felt the twenty minute guided tour was worth the money ($5/adult, $4/kids CAD).  The church was founded in 1642 and its history is entwined with that of Montreal. So in learning about the Basilica and the Parish, we also learned a bit about Montreal.  We found the organ the most fascinating with its 7000 pipes and 4 keyboards.  We were lucky enough to hear it as they were practicing for Easter Mass. After a quick walk down St. Paul Street, it was time to head back home. There is always so much I want to do when we visit Montreal — like maybe take these rent-a-bikes for spin. But knowing it is close, we will have to save that for another trip.