How to Visit the 9/11 Memorial and Museum

How to Visit the 9/11 Memorial and Museum 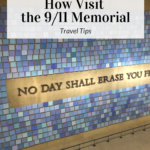 He probably thought he wasn’t being disrespectful, or maybe he didn’t think about it at all. But when he answered his cell phone in the middle of the 9/11 Memorial and Museum, not only was it impolite, it was rude. It was an insult to the other museum visitors, and more importantly, to those who are memorialized there.

The 9/11 Memorial and Museum’s policy explicitly states that the “use of cell phones for talking is prohibited in exhibition spaces and theater.” That means you cannot stand in the original footprint of the North Tower, a place that honors the victims of 9/11 and take a phone call. It is hallowed ground. It is sacred. You would not answer your phone while visiting a loved one’s gravesite in a cemetery, would you? As I was listening to a recording of one of the victims sharing their last phone call, their last spoken words ever to their loved ones, while he was chatting away with a buddy. It was beyond tasteless; it was offensive. They say you should lead by example. In a space that not only remembers those who lost their lives but is the actual spot in which they lost their lives, the 9/11 Memorial and Museum seems like a place you would want to exemplify behavior for your children to emulate. It is not surprising; his teenage daughters showed the same lack of sensitivity as he did. Neither of them appeared interested in the museum nor seemed to have a desire to be there at all. For the most part, the two of them sat huddled on a bench together glued to their cell phones, scrolling their social feeds.

Whether you know someone who was in the Twin Towers on September 11th or not, we all have some type of six degrees of separation connection to New York City and the World Trade Center. Everyone has a story that brings them right back to that day. Brings them back to that very moment they learned about the horrifying act of terrorism that was being committed on American soil. I was born in New York City. I have lived in New York City and I even celebrated my sixteenth birthday at the Windows on the World. Early in my career, I even worked on one of the top floors of the Twin Towers. On September 11, 2001, I was eight months pregnant with my second child. I was on a family vacation in Maine. That morning, on our way to Portland, the news began coming over the radio. By the time that we arrived in town shopkeepers everywhere had placed televisions in the front windows of their stores. People on the street were clustered in front of them. We stood there together as we collectively watching the Twin Towers come crashing down. I will never forget it.

Visiting the 9/11 Memorial and Museum I have been to New York City many times since that day. Until this trip, I was unable to visit this place. Even walking through the beautifully designed Oculus, and catching a glimpse of One World Trade Center through the skylight was painful. As I approached the 9/11 Memorial, I had a hard time peering over parapets engraved with the victims’ names to get a glimpse of the pools. When we arrived at the entrance to the museum, all at once I understood why there are tissues strategically placed throughout the building. A Reason to Disconnect

There is a time and place for everything including being online and accessible to others, although I am an advocate for unplugged travel whenever possible. You will notice I have very few photos to share because like cell phones, cameras are not allowed inside the historical exhibition of the 9/11 Memorial and Museum.  It is a place to remember, to be in the moment, and to never forget.

Travel Tip: Use CityPASS to save up to 50% on combined prices for admission to the 9/11 Museum and other NYC must-see attractions!

What is your personal policy on cell phone use while traveling or on vacation? I’d love to hear your thoughts in the comments below.