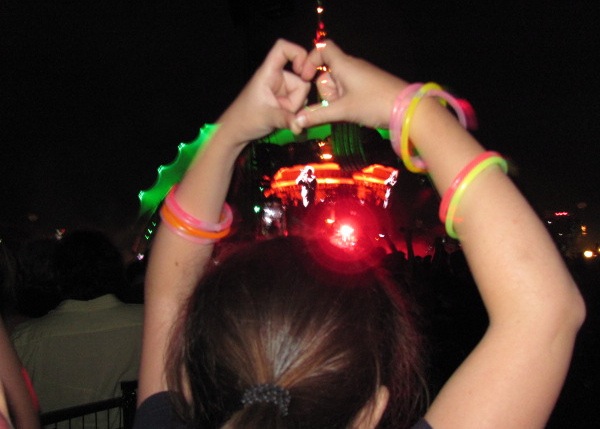 My husband and I have been U2 fans for more than 25 years. Collectively we have seen them over 30 times, across 3 countries, and in countless cities with many friends. However, we hadn’t seen them with our children. Our kids are growing up U2 fans by default. Their music is always playing in our house the same way I grew up as a Rolling Stones fan. My dad would always play their albums on his turntable and, as a college sophomore, I went with my parents to see them at Shea Stadium. So for me, it was only a matter of time before countless hours of listening to U2 would give way to a live performance for the entire family.

We surprised our 11-year-old son and 8-year-old daughter with tickets at Christmas (2009) for a summer show in Montreal. Little did we know that they would have to wait more than 18 months to see the band. A back injury for Bono delayed the U2 360 Tour and put our original show on hold for a year.  With some extra time on our hands, we were able to properly plan for our trip to Montreal.

Using one of my favorite hotel travel web sites, Jetsetter, I was able to get us a room at the Hotel Nelligan for just $150/night. We love staying at this property in Old Town whenever we come to the city. With our accommodations set, now it was time to plan for the concert.

Prepping for a U2 Concert

I had been following the concert tour on Twitter since it kicked-off U2 fans are a rare breed. They are a family or dedicated followers for sure. They tweet the show’s set lists song-by-song with a specific hashtag like #U2360MTL so you can vicariously be at the show through the online community. Yes, I guess you could say I’m somewhat fanatical too (did I mention that my husband and I vetted our wedding bands based on their ability to cover One?) I was also able to occasionally listen to the concerts live online when it was available.

One of the best finds during our pre-trip search was though was a specific Twitter account run by the Montreal Metro set up to make getting to/from the concert venue as smooth as possible (Editor’s Note: This Twitter account is no longer active). This show was being held at the Hippodrome, an old racetrack retrofitted to handle a U2 show. It was being requested that all 80,000 attendees use public transportation to get to this outdoor venue. As we eagerly walked to the Metro stop, we reminisced with the kids about the days when we would take the subway to work in New York City. But we were not fully prepared for this ride. The subway doors opened on the platform and the train cars were already full to the brim with concert goers.  With no other choice, we pushed on, put the kids in the center, and had them hold the railing for the next 12 stops. At each station, it was more of the same, incredibly more people kept getting on.

Finally the last stop. The 360 Claw was insight.  We walked towards the racetrack along with the thousands of other people spilling out from the Metro.  Once we passed the gates we reassured our kids many times that we would not get separated. Though we did make a plan to meet at a specific security station and to identify security personnel “just in case”.  We also donned glow bracelets hoping to make it a bit easier to locate each other in the sea of people. We had chosen General Admission (GA) tickets on the floor thinking that we would have plenty of room in the back, as we had in past GA experiences. What we didn’t take into account was that this was a racetrack with bleachers brought in just for this concert, not a true stadium with plenty of seating.  Therefore the floor (or grass in this case) was the primary source of “seating”. It looked to us to be about 40,000 fans in GA. To say the least, it was crowded. We quickly maneuvered into a safe spot up against a guardrail so that the kids were protected and we could hold them up if need be.

As the opening act, Interpol took the stage my daughter admitted to me that she was scared.  I had not given any consideration to what it might feel like for her to be in a space that was accommodating one-eighth the population of our entire state of Vermont.  I hoisted her up onto my shoulders, held her close, and told her it was going to be great –you’ll see.  As soon as Bono and the boys were on stage all of her fears seem to fade away and we were both swaying to the music.  At one point when Bono let the audience sing his lines to I Still Haven’t Found What I’m Looking For she turned to me and asked: “Mommy, is this a sing-a-long song?” My heart pretty much melted right there on the spot. Forty-five minutes into the show, a security guy holding tickets, was scouting out the audience near our corner. He started asking “how many in your party?” As I spewed out in broken French something to the affect of “S’il vous plaît, il y a quatre personnes dans ma famille S’il vous plaît!” I was hoping to become this family. Slowly the guard looked our family over — as well as at the other screaming people around us. Unfortunately, it wasn’t our time but another first-time concert going family got to watch the show from beneath the band’s feet. The rest of the concert was great.  As we listened to songs like Miss Sarajevo, Zooropa, City of Blinding Lights, Vertigo, I’ll Go Crazy, Sunday Bloody Sunday and Walk On we danced and sang together at the top of our lungs. And for the encore, they played One and a perfectly timed Moment of Surrender until a torrential downpour abruptly ended the show.  Was it the best U2 show I have ever seen? The back-to-back shows in Dublin in 2009 probably win that award in my book, but seeing this U2 show with my kids was magnificent.

The next day we had breakfast in the hotel and took our bikes for a spin on the Quays of Old Port.  It is mostly flat, except for few cobblestones here and there.  We wove in and out of the canals, stopped to watch the locks being filled and enjoyed the beautiful views.  There are so many great things to do on the Quays like Cirque de Soliel, the Labrinth and the Science Center but the day was far too nice for us to spend it inside. After a quick walk and lunch in Old Town, it was time for us to head home. We visit Montreal several times a year.  It is less than two hours from Burlington. We create lasting family memories every time we are there. However, no trip will ever be as special as this one.